Today is the day set aside to celebrate all of those wonderful mutts in our lives.

This is Bogart, the sweet boy who was our first dog.

He was my husband’s “bachelor dog”  but he and I became instant friends from the moment we met.

My husband got him from The Chicago Anti-Cruelty Society and they told him he would be 35 pounds, the perfect size for an apartment dog. In reality he was more like 70 pounds and wonderful in so many ways.

He was the most adaptable dog I’ve every known.  He accepted me immediately, loved both of our babies and adjusted well each time we moved until we finally settled into our current house.  He took everything in stride and welcomed each new person and situation as if it was meant to be.

He had so much energy and climbed trees trying to get to the squirrels. He actually took the bark off of one tree with all of his attempts! During my son’s backyard 4th birthday party, a baby squirrel fell into the yard (another squirrel story) and Bogart quickly grabbed it much to the horror of all of the children and parents in attendance.  I’m sure you can imagine the sound of the instant shrieking chorus! Our elderly neighbor heard the commotion and when I explained to her what had happened she laughed and thought he must have been so proud that he finally caught one. She loved him so much.

He had a sweet tooth like no other.  I had to ask my Grandmother not to wrap her homemade candy like a Christmas package after he found it under the tree, unwrapped it and chewed open the Tupperware.

He ate a pie off of my in-laws kitchen counter when they were watching him one weekend while we were out-of-town.  My husband apologized for the missing pie and the comment back was “what about the donuts?”.

Nothing was safe, no matter how high or well hidden it might have been. He found his way into the pantry, onto the counters and into drawers.  The refrigerator seemed to be the only deterrent for his super-sized sniffing skills.

He loved the children and was so gentle with them.  He quickly figured out that laying under the high chair at meal time was the place for constant, yummy rewards.  Occasionally getting hit by a dropped sippy cup was no big deal and an accepted risk in return. 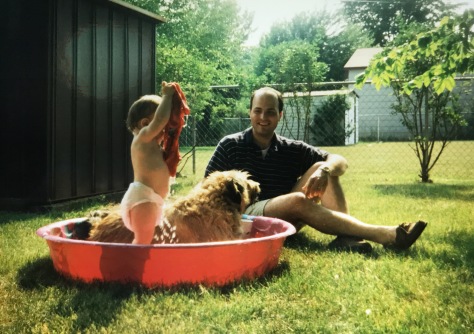 He was an absolute maniac in the car and unfortunately never grew out of that no matter how many times we tried to work through it. He ran side to side, pushing off the doors like a swimmer doing a flip turn.  Restraining him didn’t work, he escaped out of the harness we tried. Riding in the way back of the wagon was just as bad if not worse, he had more room to zip around with three windows to use as blast-off points. Our car would sway side to side as we made our way down the road and we got lots of crazy stares. The vet became our only planned destination that needed the car, anywhere else was just too exhausting.

He couldn’t catch worth a darn. Things would bounce off of his nose, head or the floor right in front of him. He howled at sirens, liked to scratch his backside against the bushes, loved to chase his tail and rolled over on command.

His hair was crazy and went in 1000 different directions.  He had a long curl between his eyes that we called his character.  I always wondered what kind of dog he was and I asked the vet what she thought.  Her guess was part Otterhound. We always described him as a “Benji” looking dog only bigger. When I dropped him off to be groomed one time they called him “Tan Dog”.  Whatever he was, he was the most perfect Bogart he could be and was with us for 14 years.

Thanks for the memories Bogart, you were the first one to steal our hearts and were one in a million!