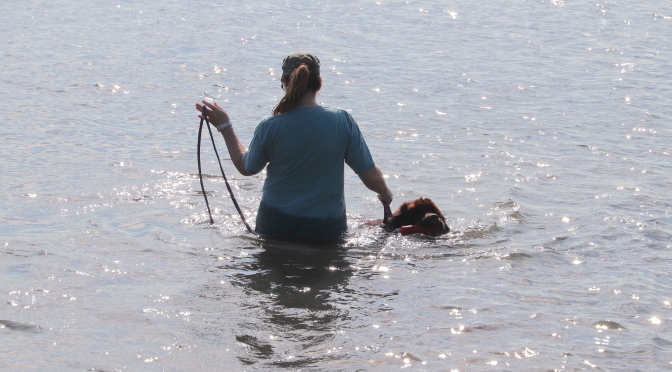 Once we returned home from our first water test, I was antsy to get back in the water and train with Winn but we would need to wait for at least another week.

Reflecting on what we did well and what we needed to work on, I was most concerned that Winn would have a newly developed fear of water because of the run-in she had with the horsefly.  A couple of days before our next practice, I snuck up to the lake with Winn on a weekday when I knew there wouldn’t be anyone else around, brought her favorite toys and planned to just have play time in the water.

When we arrived, she went right down to our regular spot, waded right in and was ready to go after her toys. What a relief! 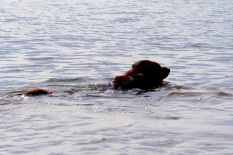 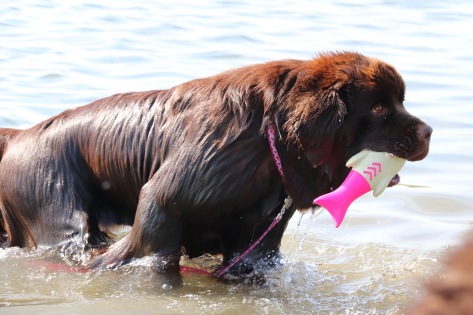 We played with different toys for a while and I mixed in her bumper and life jacket just for fun. She wasn’t reluctant at all to go after anything I threw out for her so I was pretty confident the horsefly fear had been tucked away and as long as another one didn’t show up while we were testing, we should be fine.

The exercise that I knew we still would have trouble with was Tow A Boat.  After her reluctance to go to the steward at the last test, I knew I wanted to have different people give her treats from the boat to reinforce her approach.  The biggest issue for her has been dropping the bumper before she gets the boat up on the beach. I understand why she does this, if she’s able to walk, the people in the boat can walk too and are no longer needing to be saved. Now I had to figure out how to get her to take it further so I pulled out my training book and re-read all of the different suggestions on how to get her to pull the boat until I say stop. 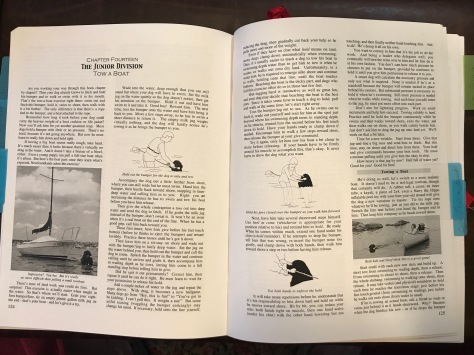 If I couldn’t get her to pull the boat all the way in before dropping the bumper, we would still have a chance if she picked the bumper back up and pulled some more. It’s not a very efficient way of doing it, but I would be allowed to keep directing her to pick it up and pull as many times as necessary until the boat was beached.  The telling sign is that the boat comes to a stop and the line is still taught.  If the boat drifts in and the line is slack, she needs to keep pulling until there is tension in the line, then the exercise is finished. I decided to focus on that. My first choice was to have her keep coming toward me in one smooth motion, but I wanted to have a back up plan so that we would still have a chance of passing.

Every night before dinner I placed her bumper on the ground and told her to “get it” and “come”. We would do this three times and then she got her food.  When she was doing this well, I tied her jug filled with water to the end of her bumper line. I would tell her “get it” and “come” and she would pull the line tight and then keep walking until I told her to “halt” and “give”.  Winn will do most anything for food so after doing this for several days successfully before dinner I started randomly calling out “get it” at different times of the day until I was sure that she really knew what to do and that she was willing to do it.

Finally we were ready to get back to practice with our training group and we met up on Labor Day. Technically Winn still wouldn’t be cleared to mix with other dogs for another three days but I would keep her away while the boys practiced and then bring her down after they had done everything they wanted to do.  We always set up crates and keep the dogs separated when we practice since we act as each others’ stewards but I didn’t want her to be a distraction.  This was an important practice for all of us and we all wanted to do our best. Our next test was scheduled for that Saturday and this was our first practice with the boat in over a month (she was completely confused during the test in Indiana which was the last time she had tried the exercise).

The weather that day was terrible. Winn and I had gotten there early so that we could practice on our own before everyone got there. I had brought Winn’s jug and attached it to a blow up donut ring so that we could practice beaching on our own before it was our turn with the boat.  After all of the work in the house she did it perfectly! She kept pulling until I said stop and she even was willing to pick up her bumper from the ground and pull again.  Thank goodness our work at home was paying off!  Soon after that a storm came rolling through.  We all stayed in our cars watching the weather maps, hoping it would blow past so that we could get on with a practice. Normally we probably would have gone home but we all had things we wanted to work on before the test and the boat was there so we waited and eventually the skies cleared and it turned into a beautiful day.

After the other dogs had all practiced I brought her back down for her turn with the boat. Our normally calm lake was pretty churned up with the wind and the storm and she wasn’t as confident as usual.  She swam out short distances and did everything really well but when we moved out further to the test distance she didn’t want to swim out. I decided that we wouldn’t go to the test in Michigan on Saturday, our friends hadn’t signed up for that one and would be practicing that day instead. Our club’s test was the following weekend (at the same location where we have been practicing) and I really wanted us to be our best for that one since it was our last chance.  It would be better for us to have a fun practice with our friends than try and do everything perfectly in a new location with the added nerves of being in a test.

I was glad I made that decision because when we went back on Saturday she did have a couple of issues that we worked through and by the end of practice she was doing Take A Line and Tow A Boat perfectly. I wasn’t concerned about the other exercises so we didn’t practice them, I just mixed in her favorite retrievals to break up “the work”, which for Winn isn’t work at all.  She really loves being in the water and her energy level was great. She was swimming without her life jacket and was still really strong at the end of practice.  We were as ready as we were going to be.  She had mastered all six exercises in our first summer of training and I was so happy with all that she had learned.  If we could pull it off in the test, that would be the cherry on top.

7 thoughts on “Back to training for round 2”