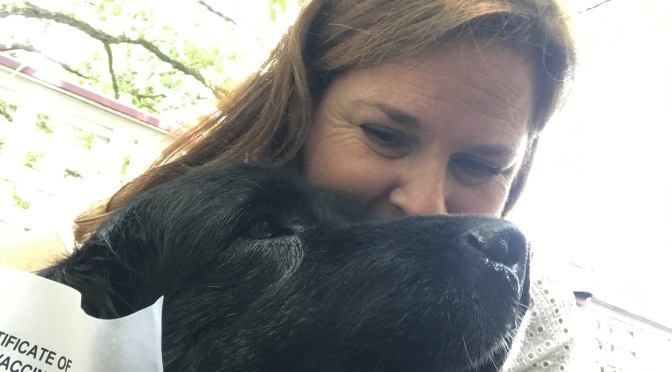 Annie and I had a big day today.  A day that changes everything!

It was time for her rabies shot so our big date was a trip to the vet.  Annie and I have made many of these trips over the last year and 1/2, but this time was very different.

When Annie was surrendered to rescue, the only document that came with her was her 2014 rabies certificate.  By the time she came home with us a year later, the rabies tag was long gone and the certificate we received was in pretty rough shape but the story it told was clear to me.

It’s a copy of a fax and is crooked and faded. On multiple occasions I’ve had to pull it out of her file when asked to show proof of vaccination.  Each time I pull it out, the anger bubbles up because it is a reminder in black and white of her life before us.

The owner’s name and address belongs to the man that operated the kennel/puppy mill.  It’s easy for me to say that even though I’ve never met him, I hate him.  Her name is listed as Anne, but “Paris” is written next to it. Why does she have two names? I don’t know.  Her age is listed as 7, although she had just had a birthday and was actually 8. Her weight is listed as 00. Record keeping was obviously not a priority with these dogs.  There are other notes that are hard to read, but are the vaccinations that she received after she was rescued. At the top are the words Annie Paris, blaze and orange collar.  The final glaring bit of information is the list of vaccinations done which only includes 2 things, the one she received that day and another rabies shot she received May 23, 2008!

These are all broad strokes that paint a picture of neglect.  After 6 years, what compelled him to seek out a vet to administer a 3 year rabies vaccination? Who knows, but what really bothers me concerns the veterinarian.  There is no way he could have examined her and thought that she or any of the other dogs from that kennel were receiving proper care.  The conditions they were forced to live in were unsanitary and disgusting.  Knowing Annie as I do, they would have had to drag her to him, with her trembling and cowering.

So now, here’s the good news.  Annie came to us with a broken spirit on the mend thanks to her rescuers and now she is a completely different dog.  She’s happy and loving, she has a spring in her step and a twinkle in her eye. She regularly approaches me and nudges my hand for a scratch behind the ear. She walks on leash beautifully and loves our neighborhood patrols.  She comes running when she hears the scoop in the dog food or the word “treat”.  She doesn’t hide in her crate anymore but instead sprawls out all over the house, moving around, finding a comfy spot on the cool tile or under my feet or on the rug in the next room. She’s quick to come when I’m having training time with Winn and she will do her two tricks, sit and down, with precision so she can also get treats. She joins me in the kitchen when I’m cooking, confident that she will get a nibble now and then.  At the end of every day, we climb the stairs together, I give her her eye drops and then she collapses on her Big Barker bed and lets out a sigh of contentment.

So this time going to the vet was different. Yes, she trembled as we were waiting, it took a lot of gentle coaxing to get her into the room and she wasn’t overly enthused about the attention she was getting but we both eagerly left with a treasure in my hands.  I now have a proper certificate with both of our names in print.  It is signed by a Dr. who lovingly cares for her and is genuinely invested in her well being. The final reminder of her previous life can go in the trash. We belong to each other, and we have no reason to ever look back again!