A couple of months ago I was mystified by the disappearance of items, mainly from the kitchen.  The mystery has been solved and indeed, Annie is the culprit. 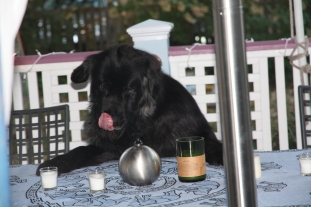 Thanks for leaving some crumbs for me!

Annie jumps up and gets it.

The table outside has also proven to be a source of good crumbs. Sometimes there are leftovers from the the night before after the table is cleared in near darkness.

Are dogs like people in that when one sense starts to weaken another gets stronger?  Annie’s eye sight is compromised, especially in her right eye and sometimes I think her hearing may be getting weaker as well.  However, her sense of smell is just fine and quite precise!  It almost seems that it is getting stronger.  As time has gone by, she has gotten more adventuresome and she has made new discoveries.  Chances are, if she swipes along the counters she might knock something off that is quite delicious.  She has also learned to trust her nose to target specific areas so she’s gotten quite successful with this technique.

Our previous Newf Bailey was always hungry and would get into anything that was left out. We learned to always survey the area before we left the house and look for things that might appeal to her.  Occasionally she would still find something, but it was pretty rare.  She’s been gone for about 3 years and Maisie has no desire to search for food so we’ve gotten pretty relaxed about leaving things out. I am having to retrain myself to make sure everything is put away or out of reach because the bottom line is, if she gets something, it’s my fault that she found it.

We are finally starting to see her true personality.  She is so affectionate and is very silly.  She roams around the house with confidence and I love seeing her so comfortable in her surroundings.  Annie has only lived indoors for the last 2 years.  First in her foster home and now with us.  That has opened up so many new discoveries that she really is like a kid in a candy shop.  Everywhere she turns, there are nice things just for her.  She is warm, she is fed, her water bowl is always full and she has multiple beds to choose from.  When one gets hot or uncomfortable, she just moves.  She lets out little moans of contentment in her sleep and it’s wonderful!  I love seeing her so happy, so really, her joy of discovering treasure when my back is turned is also wonderful.  She has no fear in our house, and that is exactly what I was hoping she would discover.

One morning, I came down and there were paper wrappers all over the kitchen floor.  I was so confused because Annie had come up to bed with me the night before, and was still upstairs with my husband.  I had gone shopping the day before and had stopped into a new pet store and bought a couple of toys and some Nature’s Miracle.  Before I left  a bag of “samples” was thrown into the bag.  They were in a brown paper lunch bag that was stapled shut and decorated with stickers.  I didn’t open it and had forgotten about it when I went upstairs that night. The sample bag was still in the shopping bag in the middle of our kitchen island.  At some point in the night, Annie had tiptoed downstairs, gotten the bag off of the island and torn into the smaller bag finding 3 different food and treat samples.  For a dog with no front teeth, she has proven to be perfectly capable of tearing into sealed plastic bags!

I remembered a story her foster mom told that one night she got up to let one of the dogs out and when she came downstairs in the dark she was greeted by two black dogs that had white faces. In her confusion, she flipped on the light and was greeted by Annie and Rayne and a bag of flour that had been ripped open and strewn about!  Rayne is their #1 scavenger and if something is within reach, she will find it.  This was Annie’s first lesson in the art of midnight munchie counter surfing.

There has been one other successful midnight kitchen raid that resulted in a shredded, empty treat bag on the floor so now the kitchen is surveyed very closely before we head to bed.  The idea that she wakes up, quietly sneaks downstairs without waking us and then returns hopefully with a full belly really makes me smile.  She still has success with mid-day discoveries and this weekend she snatched a loaf of bread that was with a few things that still had to be put away after a trip to the grocery store.  I had run upstairs to change laundry loads and when I came back down there was only 1 loaf where there had been 2.  Sure enough, the plastic bag was ripped open and was in the back of her crate along with a pile of crumbs.  At least it was bread, I had quickly put away everything that I thought would appeal to her (lunch meat, a pot roast, some cheese and butter) but somehow thought the bread was safe.  The answer is obvious, everything must be considered irresistible because she keeps having success.  The only way to guarantee that her waistline wont continue to expand is to remove temptation immediately!